A Musical Evening with the Singing Priests 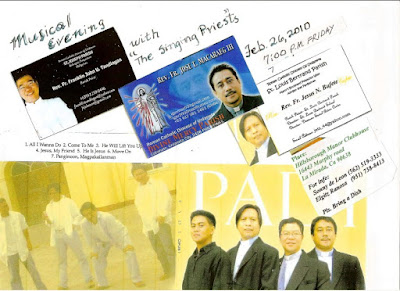 Inviting everyone to attend
A Musical Evening with the Singing Priests

This is a fund raising event for the parishes of Urdaneta, Baluingao and Asingan. 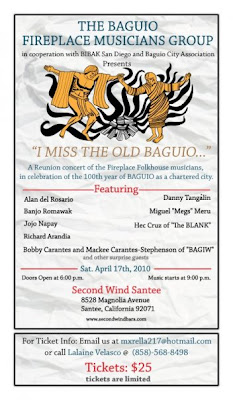 1.3 Mackee presented to the group the upcoming presentation
titled "I MISS THE OLD BAGUIO" to be held at a bar named
Second Wind at Santee California on April 17th, 2010.
1.4 Mackee will give 85 tickets for the BCASDC to sell
to its members and Baguio acquantances who would be interested
to watch the Gig. Tickets cost $25. For every ticket
sold, BCASDC will receive $13. Everything as far as the setup
of the musical presentation venue has already been taken care of.
1.5 The event will start on 9 PM and will last for three hours.
It is a limited seating venue and will be reserved for members
who are elderly. Please come early to ensure a seat.
The bar will open from 6 PM to 1 AM. Come early to
allow for socialization with Baguio residents.
The event will mostly be a standing room only.
1.6 Mackee presented a CD composed and sang by her brother
Bobby Carantes from Baguio City. CD is entitled Bladegrass.
The music sounds of a somewhat folk - country genre.
If interested to purchase CD, please contact Lalaine. 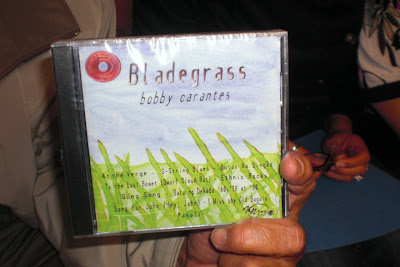 CD costs $10. For every CD sold, $3 of proceeds will go to
the BCASDC. CD will be available for saleat the music presentation venue.
1.7 After her presentation, Mackee left the meeting.
2.0 The people present in the meeting then
proceeded to discuss the affairs of the BCASDC.
2.1 Fred Madriaga opened the discussion by stating that
during a gathering of BCASDC members last January 30, 2010
at Lillian's residence , there was a shared consensus that
that the Association is 'deteriorating'. It was then suggested
that something has to be done about the presidency of the Association
in order to establish a viable leadership for the Organization.
2.2 It was suggested that Lalaine Velasco step up to be the
acting President of the Association. All the Officers present in the meeting
agreed to the suggestion.
2.3 Officers present expressed that they will support whatever
the Presidency decides.
3.1 Other suggestions by Officers at the meeting:
-Rico Bona suggested that Association Projects
should be simple and doable and must not be elaborate
so the Assocation has no difficulty attaining it.
-Plan out the logistics so that the picnic on September
will be a decent event.
-Officer Elections for the Organization will be held at the Septmeber picnic.
3.2 It was suggested that the "I MISS THE OLD BAGUIO" musical presentaiton
be used as a potential to recruit new members to the Organization.
Rico Bona suggested to hang a BCASDC Assocation banner at the venue so
that people will see it.
Posted by Dan Nino at 11:26 PM No comments:

Dan wanted to share the Pangasinan Brotherhood-USA Elections 2009 pictures to the members of the PB-USA e-group.
Click on the image below or go to the website:
http://www.flickr.com/photos/juliusweb/sets/72157623214519721/
to view more pics.
He didn't mention where the pictures came from so please respond to be acknowledged.
-E-group Admin