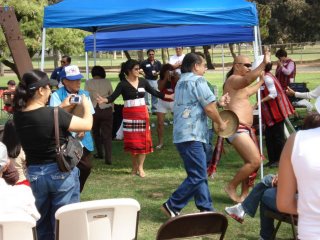 There's something about
Baguio City that draws my
affinity to her despite not
living in the city for
twenty years.

The Baguio City Association of
San Diego held a Potluck Picnicat
Rohr Park, in the City of Bonita
(about 8 miles South East of San Diego,
California) last Sunday September 30, 2006
from 10 AM to 4 PM. This time I decided
to join the picnic out of a desire to
reconnect with former Baguio residents.

This is the second time I attended a Baguio City Association of
San Diego function meeting so people in the group were not
familiar to me. Various Officers such as the President, Vice
President, Secretary, etc.. were elected during the picnic.

I am acquainted with Manang Lillian Ares. She is the outgoing
organization presidentafter fours years of service. I also had
the chance to meet Manong Rudy Liporada the President elect
who will replace Manang Lillian in a few months.
Manong Rudy also happens to be an active member of
Baguio Web International Yahoo Group.

A sumptous Variety of Filipino dishes were available
for to everyone to enjoy.Ngem, nalipatan samet dyay
inapoy, ta awan ti naka-serve. Various door prices were
given to picnic participants.

I'm impressed with the Baguio City Association of
San Diego group. I will give my best to support its
activites for the coming months specially to draw
the younger generations (Baby Boomers and X, Y Generations)
so that the group will survive for the years to come.

More power to you Manong Rudy.

Please view some of the Picnic pictures:
http://www.clubphoto.com/perl/app.pl/albums/large_image_view?id=4804976&link_code=sa01_17 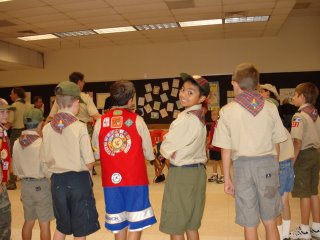 I was a member of the Chiro Orgnization as I recall from my years of youth in Baguio. It was a group whose activities are similar to the Boys Scouts of America but more emphasis was placed towards reverence to God.

Grade Schoolsers held meetings on Sundays at Home Sweet Home for an afternoon of camaredrie with other Boys and Girls, outdoor games, singing, and prayer. Occasionally the Chiro Organization would go out to various campsites around Baguio for adventures sake. The group was ran by the CICM* Missionaries.

Thirty years later, I find myself wanting to share that experience to my sons Justin and Trevor. Trevor's only in Kindergarten so he'll have to wait for another year to be able to join.
He joins the den meetings though as looks forward to being a part of it someday.

But alas, Chiro Organization is nowhere to be found in America.
The closest I can pass down that memorable experience to my kids is the Cubs Scouts movement. Justin is only 10 at 5th grade so he'll tackle a year of Cub Scouts then move on to Boys Scouts.

Have fun Justin, and carry on the tradition.

*The CICM Missionaries is an Catholic religous order that have various Christian Missions in the Philippines particulary the Northern Luzon.

Dinner get-together with friends at Goldilocks 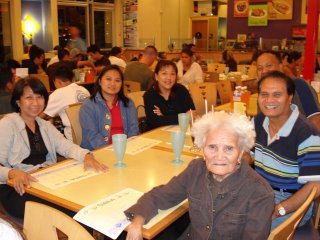 The food Seafood Platter and Chicken BBQ platter was great. Nakakabusog! I got to know more about Natz and Sheila. I learned that Natz has Ilongga in her blood line and she connected with Leo and Rose really fast because she spoke their native tongue.

I'm glad to have introduced you guys. Hope we get-together again sometime in the future. I also had the chance to catch up with Leo and Rose, not having seen them in a while.

Its really nice to visit and get together with you Leo , Rose and new friends Natz and Sheila. You truly are dear friends. Sheila and Rose, looking forward to years of friendship. I'm really blessed to have friends like you all. Praise God. 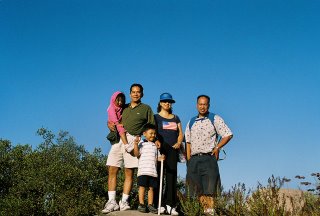 September 9, 2006
The three kids (Justin, Trevor, and Kristen ) ,Manang Christine , Kuya Chito, and myself
went out for a nature hike at Santa Rosa
Plateau Ecological Reserve , somewhere
between Murrieta and Temecula California.

It was a spur of the moment hike so nothing
was really planned. View some of the Hike and evening picnic pictures by visiting our Online Photo Album:
http://www.clubphoto.com/perl/app.pl/albums/large_image_view?id=4742582&link_code=sa01_17

After a couple hours of walking, naturally everybody had a big appetite for food.
We couldn't prepare food within the park/trail since the place is a State Park,
campfires, even stoves of any sort are prohibited.

We drove to Menifee Park instead, found a nice picnic table and cooked
some char-grilled Burgers and experimented with Lemon Garlic Shrimps recipe*.

The Lemon Garlic Shrimps came out pretty decent, actually. Kuya Chito
who is normally allergic to Shrimps tried it out. I think its the
aroma from the white wine that just tickles your appetite. 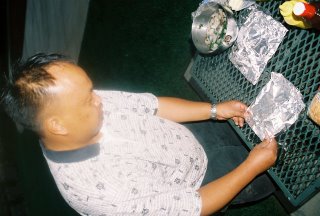 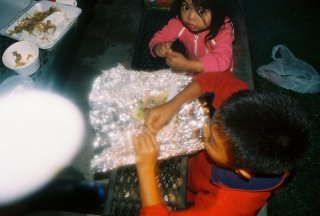 Cooking Procedure:
1. Prepare 4 squares of alumnium foil
2. Use a small brush to pspread Olive Oil on the surface of the foil.
3. In a small bowl, mix the lemon juice and zest, wine, garlic, parsley, salt, and pepper until well combined.
4. Toss with the shrimp
5. Place about 1/2 pound of the shrimp in the center
of each peice of each foil.
6. Top with Butter peices.
7. Fold up the sides of the foil. and drizzle about 1 teaspoon of the marinade over each pile of shrimp.
8. Fold the edges of the foil together to form a tightly sealed packet, leaving space for steam and heat to circulate inside.
9. Grille the packets over high heat, 15 - 20 minutes until the shrimps are cooked through.
10. Serve immediately in packets to maintain a nice pool of sauce for dipping.

*If you're interested in Camping Recipes, try out the book "Campfire Cuisine: Gourmet Recipes for the Outdoors" by Robin Donovan, ISBN: 1594740852 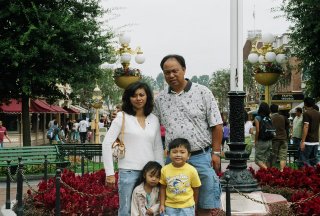 Our family went for a day's outing at Disneyland in Anaheim California.

We timed the event as a last Summer activity before Justin and Trevor returned to school.
It was a busy day, I should say considering all the activities the kids went to.

My feeling though about large theme parks is that I will never get used to large crowds, long lines, expensive fees that are characteristic of such amusement places.

I'd rather take out the family in a secluded setting say the Beach on a weekday or some place in the mountains where you could hardly see any human soul except my family's.
Just a thought. 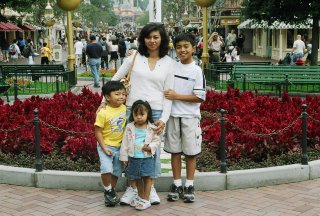 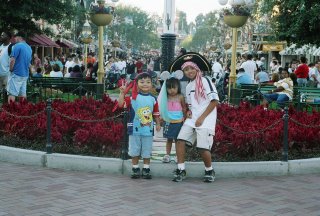 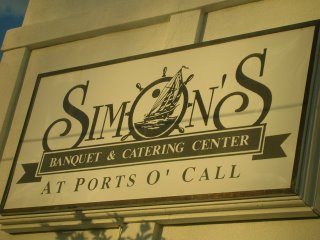 Saint Louis Alumnus from all over, got together at Simon's Waterfront Banquet at San Pedro, California on September 2, 2006.

Alumnus from far away places such as Australia, Detroit, New Jersey, Nevada and of course California celebrated the night filled with Music, Dancing, and games.

Several prices were awarded to various Alumni partipicipants throughout the night. The Maui Girls gave the attendants a treat of various forms of Polysnesian dances such as Hawaiian, Tongan, New Zealand, Samoan themes. 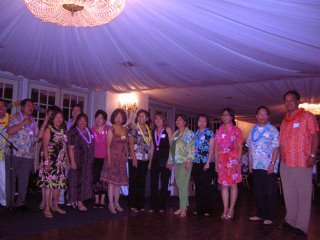 View some of the festivites pictures by going to my Online Photo Album site:http://w
www.clubphoto.com/perl/app.pl/albums/large_image_view?id=4681452&link_code=sa01_17 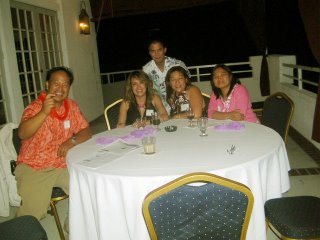 Its funny to note that Pearl and Natalie were seated on the outside balcony table overlooking the San Pedro harbor and observing the Reunion festivities inside the Dancing Floor fom an outside vantage point.

At one point, I think they felt bored and were deciding to leave after an hour. Somehow Pearl, Natalie, myself, Sheila, and Eric decided to start an Eighties reminiscing session.

We had a blast, giggled and laughed at the stories we could come up with, and before Pearl and Natialie, realized it, decided to stay put to enjoy our stories session. I think the participants inside the dancing hall at one point were distracted by the loud laughter we were generating outside.

Its good to see fellow Louisians come together and celebrate the night away.
We sang the Saint Louis Hymn after the night's festivities.

Why don't you sing along? I am sure you sang this song at a Monday morning Flag Ceremny
if you attended Elementary or High School at a Saint Louis School.

Chorus:
Let's all sing a song, gay and cheerful,
Bursting forth from our young and joyous hearts,
For our life is so bright
For we study right,
We choose a smile for our part.

Here we are students of St. Louis
That is why we are so proud,
We'll always stand in defense for it
For it makes us brave and fit.

Training our body and mind,
That in this school we find,
Bright future smiles on us,
Let's be ready thus.

We'll deserve well of our land,
Go ever hand and hand
For God's and country's sake,
This is the pledge we make.