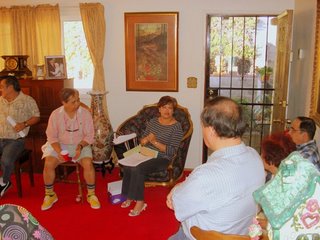 I was privileged for being invited to attend the
officer's meeting of the Baguio City Association of
San Diego (BCASD) here in (where else) San Diego California.

What an interesting mix of officers and
supporting members.

From the meeting's discussions, it has been
brought up (which I found interesting) that the
Baguio City Association of San Diego is among a
few, if not the only organization dedicated to
former Baguio residents here in the United
States. Other Baguio City organizations such as
a San Francisco chapter have since folded up.

Anyway, Lillian Ares (also a fellow Louisian)
presided the meeting and commanded
everyone's attention. Lillian is the outgoing President of the
Association who served for two successive
terms , for a total of four years.

The meeting was help at Vina Phelps' residence. 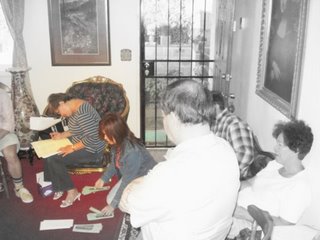 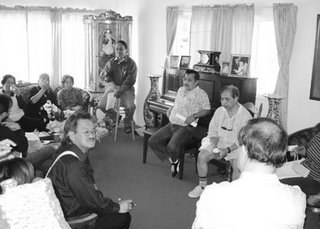 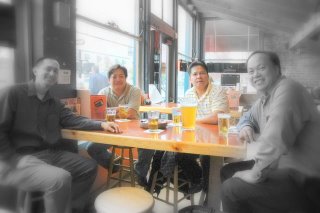 These men who were once class/school mates
back in high school (25 years ago to be exact)
took a chunk out of their busy work schedules
to have a get-together and reminisce the
good old high school days and just to
plain update how each one is doing.

Of course there was laughter, camaraderie, even
amazement among the men about how they were
able to find each other after 25 years.

Future meetings and get-togethers were planned.
There is a plan to meet on lateDecember 2006
to co-celebrate the 25th Anniversary Reunion
of Batch 81 in Baguio City.

So, calling all California based and other interested batchmates,
Eric Paragas, Sammy Valencerina, let's plan a get-together
for late December 2006. Initially agreed venue is San Diego,
although this is open for discussion.

Check out more get-together pictures at: 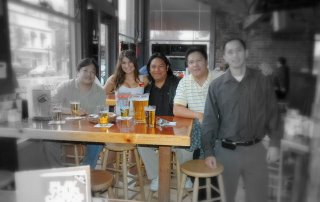 Picnic and Fishing by the Pier 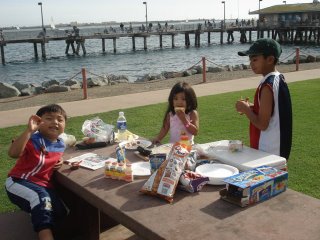 I took Justin, Trevor, and Kristen to an
afternoonof picnic and fishing at Shelter Island,
San Diego CA.

It was a perfect day to be out, the sun is
shining,clear blue sky, somewhat windy.

The high tide this day is Noon time, but alas
we arrived 30 minutes after the high tide so
we came in rather late to catch any fish.

The kids had fun casting out the fishing pole though,
watch sailboats pass by, shoo away sea gulls wanting
to eat our food, feed the pigeons, or just plain
enjoy the outdoors.

After spending three hours out by the windy
coast we just had to warm up. I took the kids to
Vietnamese restaurant and ordered a couple
of hot Vietnamese Pho Soup. Its a nice way to
recap the day. 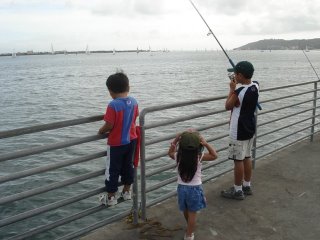 Meditation and Prayer along the Bay

Meditation and Prayer along the Bay
Having worked till 3 AM the night before,
I had the luxury of working a half work day.
I took this opportunity to spend an afternoon
at San Diego Bay for an afternoon of
prayer and meditation.

It is a nice autumn day, the blue sky above,
temperature in the mid seventies, a fairly quiet afternoon,
the afternoon sun shining on my face,
occasionally a Pelican bird flies low along the bay to hunt for fish,
the San Diego city skyline on the left of my view,
the Coronado bridge crossing over to Coronado Island
to the far left, the USS Lincoln Aircraft Carrier resting
peacefully in its home port
and the San Diego bay in front of me.
I sat on a bench, made the sign of the cross,
closed my eyes, took a deep breath
and just took the time to be in the presence of God.
Quietly, I meditated and tried to listen to what might God
convey to me this afternoon.
I prayed the Rosary, the Act of Contrition and allowed the
calm afternoon, the presence of God penetrate and
instill peace in my heart.
After an hour and fifteen minutes, it was time to
return to hustle and bustle rat race
of everyday life. Right away walking to my car,
I could feel the calmness and peace
of God enveloping my heart.

Here's my impromptu prayer:
O God please heal my heart for it is filled of
anguish, resentment, sorrow.
I lift up to you my burden, for you said
"Come to me all you weary, and I will give you rest".
You carried your cross and showed that we should
carry each other's burden.
Teach me to do the same, to help lift my
neighbor's burdens in life as well.
Heal and give peace in my soul O Lord,
as I try and learn to carry on my life.
Bless our children whom
we carry along our journey in life. 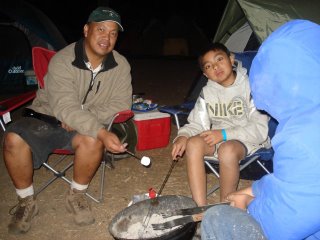 This weekend November 4th and 5th is the best
quality time I have ever spent with Justin
alone, having spent the whole weekend
with him during his Boys Scout camping.

Talk about communicating, playing, interacting,
fishing with my son Justin.

Santa YSabel is located along Highway 79, and
still part of San Diego County in Califiornia.

We arrived at the Camp Mataguay at 11:00 PM
Friday night since I still had to work the Friday
before heading out to the camp.

Justin got tired from being in school all day Friday
so I was left without a driving navigator. I discovered
that a Mapquest driving directions printout, my car's
Odometer and Odometer reset button is my best
friend when driving on dark, desolate and remote
country roads such as the roads leading to Camp
Mataguay. Forget about relying on road signs
because during dark nights such as this,
the road becomes so dark that road signs are
hardly seen.

We didn't get lost and the directions lead us
to our destination accurately the first try.
Finding your Cub Scout den's campsite
in such a big Campground though is a
different story that Mapquest can't be much
a help.

A Camp Reigistration worker gave me a map
that was hard to follow not because the map
was sketchy but because finding landmarks
at night is next to impossible. It also didn't
help that the the different Cub Scout dens
didn't identify their campsite with their
den't pack number. I got to stop my whining though.
I can't complain, 'coz we had fun and the whole
weekend was great. What more can I ask.

Saturday was filled with activities for
Justin and the Cub Scount pack that he was
a part of from fire making to familiarity with knots,
to potatoe gun shooting, tug-o-war, Bungee Cord
Canon, Monkey Bridge crossing.

Oh yes, we had a Tug-O-war match, the Dads (six of us vs. our
Cub Scouts Sons, there were twelve of them, plus one Boys Scout who
helped out. Man! I can't believe we still lost!! )

I became an improtmptu Camp Chef. I cooked California Grilled Cheese
(a concoction of Avocado, Moterrey Jack cheese, Chipotle peppers)
for lunch, Lemon Garlic Shrimp for dinner, and French Toast for breakfast.
I shared the food with the rest of the parents and kids in Camp.
Fellow campers loved it so much they suggested I be the official Camp Chef
next time around, LOL.

Finally, the day was concluded with an evening
program called The Campfire where different Boys Scout
Troops presented their group's skits. 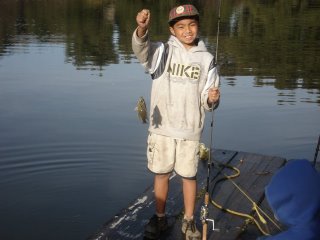 Halloween Night for the goblins 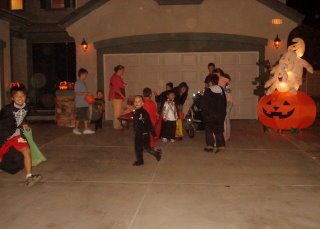 A halloween night for the goblins

'Tis the night when the kids wore their Halloween costumes and roamed the neighborhood asking for Halloween treats.

Justin, Trevor, our neighbor Nicholas with his Mom Jeniffer, and a host of kids joined together to roam the neighborhood and celebrate a happy halloween night.

Candies of all sorts, play doughs, and yes marshmallow eyes my favorite, just a kid's delight. 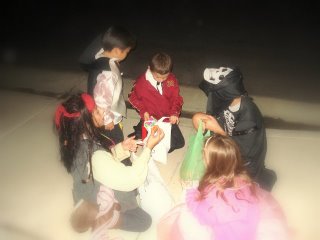